Request for feedback : Development of a new 2022 release or else?

it has been a while since I have been able to find time to work on CAELinux, but after nearly two years, I am getting back to work to prepare something new...  but I have some questions for you about what would be best.

Problem statement:
It has become increasingly difficult to include the most relevant software in a "custom" distribution because : 1. remastering an Ubuntu release is becoming very tricky (very complex boot process from DVD/USB and poor documentation), 2. the base distribution (Xubuntu) is getting bigger and bigger; 3. the main software packages for CAELinux are growing in size beyond reason (SalomeMeca is now 6Gb of compressed data...).

Thus I am asking myself some questions about what would be best for next release. Here are some options that I have in mind and for which I would like to have your feedback:

1. Switching to a lighter, easier to customize distribution. I have had very good first impressions with MX Linux, which is based on Debian Stable with XFCE desktop and ships with handy utilities for remastering a custom version and preparing / upgrading USB live installations. MX Linux is nearly 600 Mb lighter than XUbuntu and runs even with 2Gb of RAM. However, a quick try the base image containing Salome-Meca and Freecad in MXLinux is already close to 8Gb (5.5gb just for Salome-Meca). Secondary question: which software should be included by default?

2. Other alternative would be, instead of developing an ISO image of a custom Linux distribution, I could try to develop a "CAE Software center" app that would allow anyone to install in a simple manner  the main CAE software in their distribution (provided it matches some prerequisites, for example any Ubuntu 22.04 derivatives). That means that there will be no more Live USB image, but only a "post installation" customization app. This is not trivial at all to do and will probably be a mess in the beginning... but if it is worth it, why not. This could also include trying to develop simpler package installation methods for some of those codes (Flatpak, simple .deb or tar.gz packages with online install scripts).

3. A mix of those two: developing a base ISO image with the "main" CAE tools (Freecad / Salome Meca at least... for my own use

and a small app to install other packages after installation. This would be mostly a front-end to apt install or flatpak / appimage deployment.

4. A lightweight variant and a full distribution ISO with all the greatest packages: then the question is what is "lightweight" (<4Gb?) and what shall be included in light / full version? For example, I consider Salome-Meca as a central piece of software for my own use, but it does not fit into a 4Gb ISO image anymore...

5. Is CAElinux as a CAE oriented custom distro / live USB system still relevant today? Or would it better to distribute Virtual Machine images? or else?

Please let me know your opinion on those points or any other suggestions.

Less More
2 weeks 6 days ago #10060 by kwou
Replied by kwou on topic Request for feedback : Development of a new 2022 release or else?
Hoi Joel,

for me option 2 would be nice. I havenot been using the 'Salome-Meca' distro for some time now. I gather the FEA/CAD packages for my own distribution (Linux Mint).
Sometimes it works nicely and in other cases it takes quite some time to install or I donot succeed at all. So a kind of CAE software center would be great for me.

2 weeks 6 days ago #10061 by Joël Cugnoni
Replied by Joël Cugnoni on topic Request for feedback : Development of a new 2022 release or else?
Hello Kees,

first of all, I would like to thank you so much for taking care/cleaning all those of spams on the forum. I have not been able to follow what was going on here for at least a year...

I have good news on the front of the development of solution number 2: I have now developed a prototype "CAE App Center" implementation that does the following:
1. get the list of available CAE software from a web repository (currently running only locally on my PC for testing- but it will be hosted on this webserver later on)
2. present the available apps in a table, with their status
3. allow user to install, remove, run or run a terminal in the selected app (using a right click context menu)
4. and in a few days, it should also automatically create launch menu entries for installed app.

At the moments, the apps are all packaged as Singularity containers, but the execution is kept relativelly transparent for the end user. Currently, I have built and test two containers (ElmerFEM and HelyxOS-OpenFOAMv7) and testing is in progress for Salome-Meca 2021 + Aster MPI. It works already but I try to reduce the image size.

In the end, I plan to build a portable 'Appimage' for CAE App Center, so that it can run on any 'distribution'. I have also build deb packages for singularity for different releases of Ubuntu/Debian. I plan also to implement an automatic installation process for Singularity in CAE App Center to ease portability to other distros (non Debian for example). 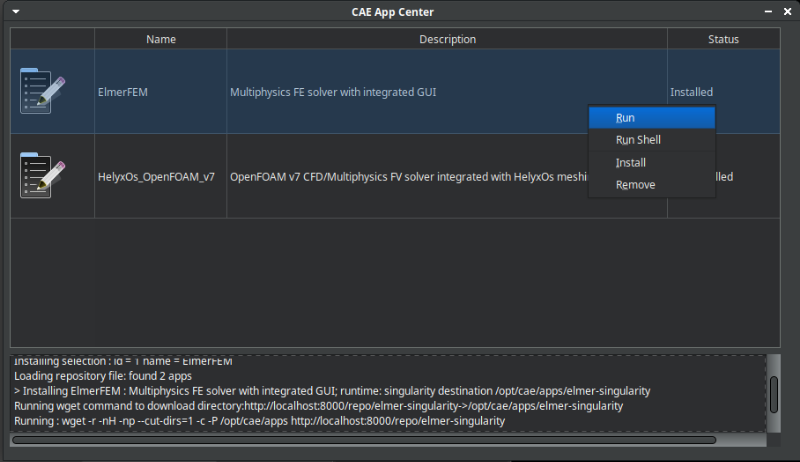 Less More
2 weeks 4 days ago #10064 by kwou
Replied by kwou on topic Request for feedback : Development of a new 2022 release or else?
Hoi Joel,

this development you are doing now, looks very nice to me,
Do you need testing before you of "CAE App Center" in advance? I probably have some time left, if needed.

Less More
1 week 2 days ago - 1 week 2 days ago #10067 by Mariusz
Replied by Mariusz on topic Request for feedback : Development of a new 2022 release or else?
Hi Joël,
In my opinion developing "CAE Software Center" is a best concept. But as you had noticed, this option needs more time and dedication.
So, option 3 is a good compromise:
1. develop a base ISO (FreeCAD / Salome Meca) - with Ventoy the size of ISO file seems to have little meaning.
2. start developing "CAE Software Center" as a long-term project.

I'm most interested in tasks involving processing data files from Lidar 3d scanner (Meshlab, FreeCAD) together with thermographic pictures (FLIR). Next ambitious stage would be loading them to Salome Meca, HelyxOS-OpenFOAM for thermal flow simulations in buildings.
So, if there are open source apps that I haven't mention above and that may play a key role in processing FLIR thermographic files for heat flow simulations - I would be grateful for including them in base ISO CAELinux file.